I always have a lot of leftover pumpkin which I don't know what to do with it as every time I cook porridge for Baby FAN, I only need very little. So, search the web and find this recipe from Happy Home Baking's blog.

The pumpkin bread turns out a little dense in the middle and was rather hard the next day, so I made it into a bread crisp and served it with tomatoes for lunch instead. I will probably make it again next time if I have left over pumpkin but this time, I might add in some cake flour to make it softer. 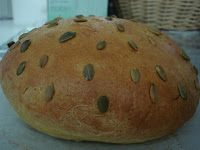 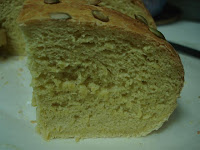 Posted by Boringtazz at 10:35 PM No comments:

I love the taste of the milk loaf and the crispy skin of the pretzel in my earlier blog. So decided to combine this 2 recipes together. The pretzel turns out really soft and yummy and crispy outside, I ate 2 immediately it came out of the oven. 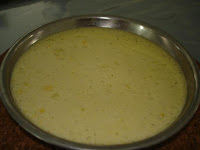