Suddenly got the urge to make pizza and thought that it would be fun to get the kids involved in assembling it.  So, I plough through my stack of recipes and found this one that I used to make when SMALL FAN was a baby.  I top the pizza with ham and cheese for the kids, as well as pork floss and mayo.  I think the kids really enjoy putting the pork floss onto the pizza while eating it at the same time.  However, was really disappointed with how the pizza turn out.  The crust was ok, but the Regu pizza sauce doesn't have much taste and the mozzarella cheese I used was totally wrong.  I used the slice version and thought it would be easier, but the cheese doesn't melt like the normal mozzarella cheese ;(  My boy keep telling me he don't like the cheese....sigh....  I will probably make it again but this time round, going to just go for the traditional mozzarella cheese instead.

Here's how the pizza look inside

Kids enjoying themselves putting the toppings for the pizza. 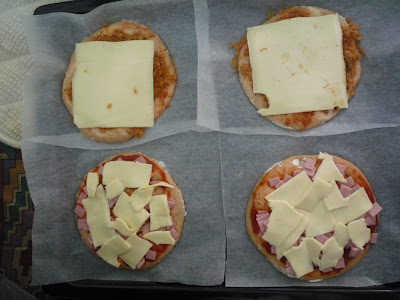