It's SMALL FAN's 6 years old birthday and he requested for an angry bird cake for his birthday party.  I kinda check out the market and it cost $100 plus to $200 to ordered one.  So I thought maybe I can try making one myself.  First of all I cut down on the $$$$ and I also get to control what goes in the cake.

I'm not a really good baker, not too confident of making fondant angry birds, so decided to buy the angry bird toy to use as the decoration.  I killed 2 birds with one stone on this, first of all, I can cut down on the time making the birds and also, I won't end up with a few coloured, sugar birds that I don't know what to do with it (don't think I will let my kids eat it since it will be loaded with sugar and colouring) but best of all, the angry bird toy can be clean up and given to SMALL FAN as his birthday present.

Bought this angry bird toy set from Gmarket, the cataput comes with the angry bird theme song and sound...really cool.  Check in out below. 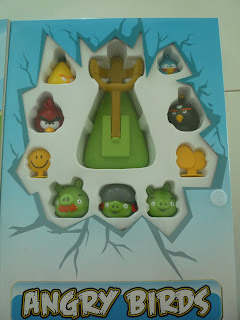 Here's what I did to make the cake. I use my favourite Chocolate Oatmeal Cupcake recipe to make the cake base. I make about 3 portion of 7 inch cake.  Then I cut out the desired shape and cover it with my buttercream frosting which I coloured green.  Then I use whatever remaining cakes I have and form it into a square block using buttercream frosting as the glue. Then I covered the block with a brown fondant that I bought from Phoon Huat, they have their own house version call REDMAN fondant, which cost $7 for a 500g pack.  Finally I decorated the cakes with the angry bird toys, some kitkat and a lovely happy birthday candles, and use a little of the brown fondant to make my SMALL FAN's name.  Wah lah...my proud creation!

I think the kids really love the cake, cause this is what is remain of the cake.

To complete the angry bird theme, I also made an Angry Bird Pinata for him.  The kids have a great time destroying it!

Wah...it's been almost 2 months since I last updated my blog...guess I'm really getting lazy.
Well, here's a nice recipe that I stumble recently will looking for a dessert to bring over for a family dinner to celebrate our national day.  Really simple but it was a real hit with the kids, I have to stop my son from eating more so his cousins can have it. Guess what I made?  Nobaked Lemon cheesecake with Mango sauce.  YUM. 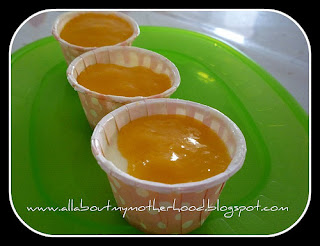 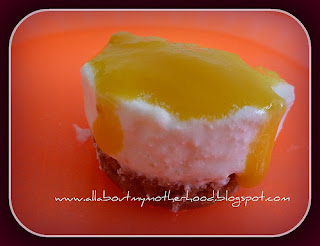 
Directions
Posted by Boringtazz at 4:29 PM No comments:

Ok, I admit, I have been neglecting my blog lately, having lots of problem with my laptop so I wasn't able to load any pictures and stuff.  But this recipe, I just have to pen it down cause it's really yummy and relatively healthy.

Directions
Posted by Boringtazz at 12:18 PM No comments:

My Dad gave me a whole box of Persimmons, I have been trying really hard to finish it before it spoil, but it's just too much.  So, I search the net for a recipe to help me make use of these ripe persimmons and I found this. The recipe was relatively easy to make and the cake actually tasted quite good, however, it tasted a litlle too chewy for my liking. Will probably make it again if I have lots of persimmons to get rid of.

3.Bake in preheated oven until a toothpick inserted into the center comes out clean, about 1 hour 15 minutes. Cool in the pan for 10 minutes, then remove from the pan, and allow to cool completely on a wire rack before icing.  I make the cake into cupcakes and baked it in the oven for about 20 minutes instead.
Posted by Boringtazz at 4:11 PM No comments:

Ok, I haven't been updating my blog for quite a while.  Getting really lazy and proscatinating.  So here I am updating what I have been keeping in my picture file of recipes for the pass one month.   First of all, celebarted my girl's birthday with a nice pink birthday cupcakes.  I used my carrot cakes recipe from my old post, then top the cake with a super tasty cream cheese frosting which I dyed it pink and use the nice pink cups that I bought from Phoon Huat, sprinkle some colured sprinkles and wa la....a sweet birthday cupcakes.

Here's the recipe for the Cream Cheese Frosting:

Posted by Boringtazz at 3:50 PM No comments: