It's a rainy Sunday, so decided to stay home and eat breakfast 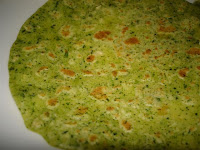 instead of our usual sunday breakfast at the Kopitiam downstairs. Tried my hand at making Spinach Pancake, it tasted quite nice, more like a crepe then pancake. SMALL FAN likes it with nutella and peanut butter. As for BIG FAN & myself we served it with a cheese and sausage cream sauce (see recipe below).

Posted by Boringtazz at 4:26 PM