Baby FAN is now 7 months old but she only weighs between 6.1 kg to 6.5kg (it fluctuates up and down). I'm getting worried if she is having enough. However, she seems to be developing fine and reaching her milestones way ahead of her brother. Here's her feeding schedule:
I wanted to stop breast feeding after 6 months, but somehow with such slow weight again, I'm getting worried if I stop entirely, she won't get enough milk since she refuse to drink from a bottle and is only about to take about 1 to 2 oz from a cup.

Now, I'm trying to put formula milk into the porridge she eats, hopefully it will increase her wait. But read from a chinese book that putting milk into porridge or soup will affect the absorption of vitamin A. So, I only put the milk into one of her porridge feed or alternate days rather then all her feed.

Found out this weight gain tips for children from Hospitals and Clinics of Minnesota: 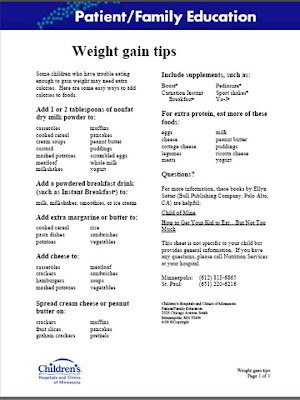 oh, didn't know that mixing formula into porridge will have a prob with vit A absorbtion.

Actually i find that you are feeding baby fan more then alexius. Alexius only takes one big feed in the morning... about 200ml. then about 3+ 4pm, he'll be given porridge. but he never finish the whole feed... then at around 6+ 7pm, he'll take another 100ml of breast milk. 9pm another 50ml breastmilk + formula... then 11pm another 80ml. sometimes he'll wake up at 6am for a little feed like maybe 80ml..

I was thinking if I feed her too much solid food, so ended up not taking enough milk.

Oh yes, I must comment about the Vit A absorption thingy. Read it from one of those Mini Chinese Cookbook series that talks about what food cannot goes with what food etc. For example, vinegar should not be cook with green vegetable as it will decrease the nutritional value of the vegetable. Never drink soup with rice as it will affect the absorption of the rice.

Not sure how true all this is as if that is the case, a lot of those baby book uses milk with Vit A food but it's endorsed by nutritionist, right? So, I choose to believe half half...hi hi.. so sometime put milk sometime don't loh...